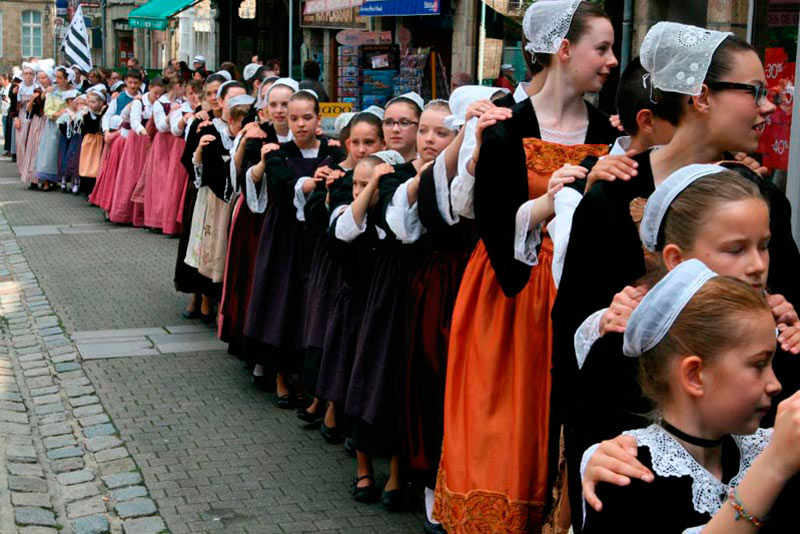 Alan Stivell, The Silencers, Jean-François Quéméner and Denez Prigent… And of course the 2500 traditional Celtic musicians, dancers and artists who all come to feed the fires of this fabulous festival, 60 years old and still hungry for more despite its age. It seems such a very long time since this festival in Saint-Loup was nothing more than a musical get-together in a meadow near the Château de Runvarec, which is where the festivities begin before heading for Guingamp town centre. The first festival took place at breakneck speed in 1863, in honour of the new Paris-Guingamp railway line, and the next went sky-high to celebrate the opening of a new gasworks, in 1893. It may now be the 21st century, but the Saint-Loup festival has not forgotten how it started, and in mid-August, every year since 1957, the festival has hosted the national Breton dancing championships organised by the Kendal’ch association for Breton arts and culture. There’s no denying that for over 60 years the Saint-Loup festival has been kept in the loop!

You can find out more about which cookies we are using or switch them off in settings.

This website uses cookies so that we can provide you with the best user experience possible. Cookie information is stored in your browser and performs functions such as recognising you when you return to our website and helping our team to understand which sections of the website you find most interesting and useful.

Strictly Necessary Cookie should be enabled at all times so that we can save your preferences for cookie settings.

If you disable this cookie, we will not be able to save your preferences. This means that every time you visit this website you will need to enable or disable cookies again.

This website uses Google Analytics to collect anonymous information such as the number of visitors to the site, and the most popular pages.

Please enable Strictly Necessary Cookies first so that we can save your preferences!